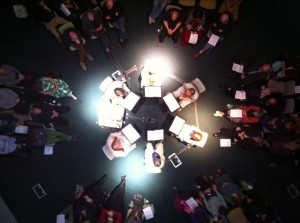 I was originally with performances by Intimate Voices in 2007/8 at Goldsmiths College, The British Library and the Lower Machen Festival.  At this time, I was engineering the 6 channel playback of the performers.  For this new performance however, I was invited to also perform the Tenor 1 part.

This required some careful planning, as I had to be able to control the balance of the ensemble from the stage.  I put together a system based on an Audio Developments AD149 Mixer (provided by Richmond Film Services). This provided me with a very small but flexible mixer, with high-quality mic preamps, EQ, analogue limiting, and level control on long throw faders.  The signals were then sent through the direct outputs of the mixer to amplifiers and Tannoy loudspeakers (provided by Dave Godin Lighting and Sound).

A few weeks before the performance we had a shoot-out of the various kinds of microphone available.  Previously we had used stand mounted cardioid condenser microphones, but I was unhappy with these in terms of the distance from the singers mouth, positioning difficulty, and resulting lack of gain before feedback.  We tried a variety of handheld and headset microphones, eventually settling on the DPA 4066 headset mic as it offered excellent sonic characteristics with ease of position and comfort for the singers, which meant we could forget about the microphones and concentrate on the performance.

The event was held at Brighton’s Jubilee Library, and whilst this was a beautiful venue, it also presented some logistical problems.  Due to the fact that the building must remain open as a library during the day, it left a very small amount of time to set up the equipment and have a quick rehearsal (doors closed at 5pm and opened again at 8 for the performance).  As a result I decided to have a ‘dry run’ the evening before, in order to test the equipment, stage layout and iron out any problems.  Having set up the equipment on the Friday night, we then had to take it down, only to re-erect the following evening for the performance.  In the event this proved to be an essential precaution, and meant that the tight setup schedule on the night of the performance worked like a dream.

Performing and engineering the performance from the stage is not without its difficulties, but actually I feel that it resulted in a more intelligent understanding of the balance of the music.  In going through the lengthy (6 month) rehearsals, I was able to get a far more comprehensive understanding of our particular interpretation, and build a unique rapport with the performers.  I feel that this resulted in much greater synergy between the sound reproduced over the speakers and the performers.

The performance was fantastic, and was enjoyed by a sell-out audience. I would like to thank Norman Jacobs from Music of Our Time for putting on the event and everyone at Jubilee Library for their hard work.  We look forward to performing the piece again later in the year.